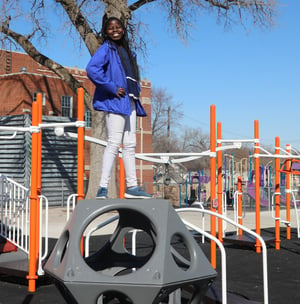 On her birthday one year ago, Imani was excited, because she got to miss school for her annual check-up, with the promise of a birthday meal at IHOP afterward. But this year, the fourth grader received some news from her doctor: She was at risk for developing diabetes.

“I was scared,” Imani said, recalling how her grandmother had passed away just a few months prior and how she heard you could faint or have other major problems with diabetes.

The health care clinic provided Imani with a packet of information about 5-2-1-0, a message that stayed so clearly with Imani that she can repeat what each of the numbers means: eat five servings of fruits and vegetables, spend two hours or less on screen time, exercise at least one hour, and consume zero sugary drinks. It’s a health message United Way of Central Iowa has been sharing throughout central Iowa, working with partners to promote these daily habits in schools, child care centers, and health care clinics.

Imani came back to the after-school program at Children and Families Urban Movement (CFUM) the day of her birthday and asked for fruit for a snack. When the staff served dessert, she gave it to another classmate.

As parents, educators, health care providers, and caregivers, we can build healthy habits as we interact with kids. 5-2-1-0 provides tips and tools to help you do it. Learn more about United Way's health initiative and support the work.

The packet of information she received at the health care clinic offered a lot of ideas for becoming more active and eating better. It also had a bingo card of things to try. Imani started doing all of them—and more. She joined Capoeira, Girls on the Run, and basketball at Moulton Elementary where she attends middle school. And she joined the bike club at CFUM.

Before Imani would eat a lot of candy, especially her favorite: lifesavers. Now she tries to eat fruit and her mother’s African dishes with vegetables.

“I don’t like salad that much,” she says, “but I do like fruit salad, so I tried to put salad on my plate and eat it.”

She has stopped drinking pop and juice and drinks more water, growing more used to the taste. And she even tries to limit the number of shows she watches at night to get more sleep.

Imani, now in fifth grade, has started to correlate these changes to having more energy and feeling better. “I went to sleep at 6 o’clock and I actually felt better the next day,” she says.

Her family supports her by having more fruit in the house. They all received bikes last fall and are planning to ride to the park together when Imani’s youngest sister is older.

Imani especially looks up to her older sister in high school who is a strong athlete. “She inspires me,” Imani says. Her friends have also encouraged her to sign up for activities.

Imani has been with CFUM for six years, attending after-school programming and summer camps. “It’s fun and you get to do activities,” she said. Her favorite is the day they went swimming at Cascade Falls in Ankeny.

CFUM has focused on incorporating 5-2-1-0 habits into all activities by serving healthier snacks, instead of donated pastries and sugary treats. Students eat apple slices, cucumbers, and limes.

Imani is hesitant about letting people know she was at risk for pre-diabetes. “Not everyone knows,” she says. But she’s proud of the fact that one year later, she won the obstacle course challenge at CFUM.

“I don’t know how but today I was really fast,” she says.

And then she went to the doctors a few days after her birthday and found she’s no longer at risk of having diabetes.