Working Hard to Transform a Dream into Reality

Shana took on her life goal of becoming an Registered Nurse after getting a push from the people who believed in her and support from Central Iowa Health Works. 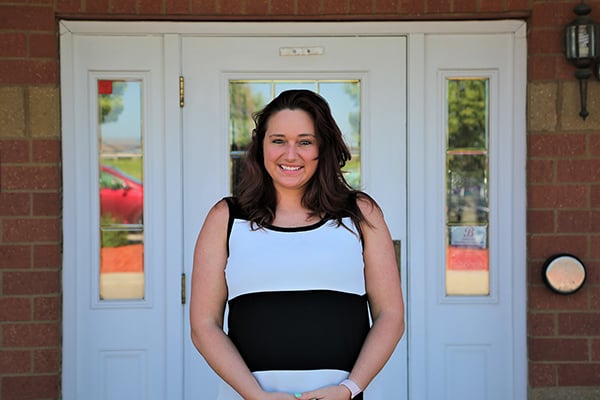 “You have to be darn-near psychotic to take on nursing school. It takes so much of your time. They can only teach you so much. There is so much outside of the classroom you need to know to be a safe nurse,” said Shana Plambeck, recent graduate of Des Moines Area Community College (DMACC) Nursing Program.

Shana’s not psychotic: She was working with the right employer, she had the family support and self-discipline required, and she had Central Iowa Healthworks (CIHW) in her corner.

Serving as a Licensed Practical Nurse (LPN) for the past 11 years, Shana had dreams of going back for her Registered Nurse (RN) licensure for a long time. Initially, she thought she’d wait a year after first receiving her LPN. Then, she started working. Then, she got married. Then, she had kids.

Her employer, Senior Housing Management, recognized her potential and relentlessly encouraged her to apply for Central Iowa Healthworks, a collaborative effort led by United Way of Central Iowa to train and support central Iowans seeking careers in health care. “Going back was a big decision,” she said. “I applied for the Healthworks grant, and I tried to back out like three times. But I kept getting phone calls from my team saying: ‘We know you can do this,’ ‘You can do it,’ ‘you can do it.”

Despite having an already demanding job as the lead nurse at Courtyard Estates, an assisted living and Alzheimer’s care community in Bondurant under Senior Housing Management, and two young boys at home who were 2- and 4-years-old at the time, she made the decision to finally transform her dream into reality. “It was an opportunity I couldn’t pass on.”

Central Iowa Healthworks, funded by a grant from the U.S. Department of Labor, Employment and Training Administration, provides four levels of career opportunities in the healthcare field for job seekers who may not have had the opportunity or access. CIHW supports participants in a way that meets their individual needs, ranging from transportation to tuition support to emergency support.

CIHW works with several partners to provide services, including DMACC. “DMACC was wonderful,” said Shana. “Right after spring break, we went into exclusively online learning. They did everything they could to ensure we could continue our schoolwork, where other schools were putting everything on pause.”

Shana was also able to lean on CIHW throughout her entire program. “It’s been outstanding. I felt [CIHW] took an interest in who I was as a person. I wasn’t just somebody who was receiving funding, I was somebody to them. I never had to guess what I was supposed to do next, they kept me informed and aware. It was like I had a secretary.”

Shana graduated in May 2020. COVID-19 has caused some delays, but once Shana receives her authorization to test, she will be issued an Emergency RN License, put in place by Governor Kim Reynolds, until she can take her boards.

“What stands out about Shana to me is she that was working a lot – and in a long-term care facility during a pandemic – during her last semester,” said Erica Tulk, Central Iowa Healthworks Case Manager.

“Most students work very few hours while in nursing school, especially in that final semester of RN. On top of managing the everyday stressors that can come up in anyone’s personal life, Shana was managing the stress of school, and then had to adjust to moving courses and everything online. I can only imagine the stress of COVID-19 potentially impacting her clients where she worked. She didn’t seem to miss a beat. She always kept a positive attitude and finished with really good grades.”

Taking on her dream required a lot of give and take with her job and family. “I don’t know what got me through other than knowing I just had to do it. I didn’t question it. My husband took on a lot at home after working full days and on weekends when I was working to make up hours I had to miss during the week for school. But he pushed me. My kids pushed me. Senior Housing pushed me. I put one foot in front of the other and got it done.”

Without the financial support of Central Iowa Healthworks, Shana doesn’t think she would have taken the steps needed to accomplish her life goal. “Becoming an RN wasn’t about making more money. I knew I could do it – I planned on it. I wanted to prove to myself – and my family – that I could do it. … There were a lot of things that I think would have kept me from it. [CIHW] supported me every step of the way.”

United Way of Central Iowa leads the fight for the health, education, and financial stability of every central Iowan.