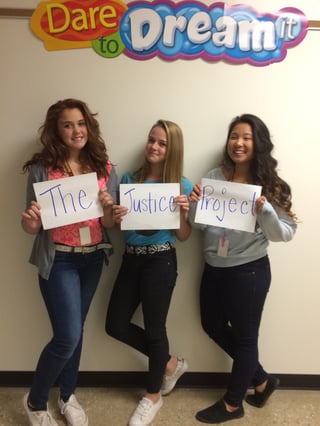 Three-hundred hours of video are uploaded to YouTube every minute. Most of them never get seen, much less transform the atmosphere of an entire school. But when McCombs seventh-grader Zoey Hannan (far left) watched a video of a mentally challenged student being lured to a party and tormented, she did something many of her peers would never consider. She looked outside herself—a popular 13-year-old with high self-esteem—and realized that her own actions could help others.

“Zoey expressed her concern about young people being bulled with such compassion, understanding and humanity,” says Echelmeyer.

Zoey has promoted a message of personal responsibility.

“You can’t control other people’s actions. But you can be nice to everyone.”

The pair brainstormed ideas and decided that Zoey should start a subgroup of the Golden Eagles that focused on building positive relationships among students. The Justice Project was born.

“I hadn’t heard of another school with an anti-bullying program,”
says Zoey. “They talk about it, but they don’t do anything.”

The Justice Project does a lot of things. They print anti-bullying ads in the school newspaper; visit feeder elementary schools to share their message; and hold rallies, sell T-shirts and organize bake sales to raise awareness of bullying, especially cyberbullying. United Way dollars help to fund these activities.

Most importantly, the group holds monthly meetings with games that promote open-mindedness, nonviolence and respect.

“These monthly activities allow students to make connections with others, when they previously might not have,” says Echlemeyer.

Over two years, The Justice Project grew to more than 30 members. Zoey specifically targeted well-known bullies and victims and asked them to join. Many of them did. She also made sure to include students with special needs. According to Echelmeyer, special education teachers report increased participation and engagement in these students.

Through it all, Zoey has promoted a message of personal responsibility.

“You can’t control other people’s actions,” she says.
“But you can be nice to everyone.”

At Lovejoy Elementary, The Justice Project led an activity where kids had to take as much toilet paper as they thought they would need on a camping trip, causing everyone to stock up. The kids then had to write one nice thing about a classmate on each square they had.

Activities like this help students to focus on the positive qualities of others rather than the negative. Students started redirecting bullying behavior they saw in friends.

“If they see someone bullying someone else, they really do tell them to stop,” Zoey says of her McCombs’ classmates. She notes that students don’t sit alone at lunch anymore; other tables invite loners to join them.

“We have seen these interactions bring positive change in our schools,” Echelmeyer says.

“This allows students to engage in an open dialogue about
their life problems.”

Echelmeyer credits Zoey for inspiring this large-scale change. Now 14, Zoey graduated from McCombs in May and will attend Lincoln High School this fall, where she hopes to continue The Justice Project among a larger student body. Her McCombs experience has taught her the power of collective action.

“I’m not going to be able to say something to change everyone’s minds and get them to stop bullying,” she says. “But if I can get enough people into it, that’s worth more.”