Leaving a legacy through planned giving

Jem Gong-Browne is slowly working toward becoming a United Way Tocqueville Society member, being able to donate $10,000 a year, but she has already left a legacy of giving that will last forever.

Jem, director of corporate strategy at Principal, is the current chair of Women United, formerly known as Women's Leadership Connection (WLC), a group of about 700 women who invest in improving the quality of early care and education in central Iowa. Jem joined the group in 2008. She then became more involved with the group when she was pregnant with her daughter eight years ago and was moved by the idea of giving all children—not just her own—the best foundation from birth.

In December 2017, Jem made a lump sum donation to establish an Endow Iowa charitable giving fund at the Community Foundation of Greater Des Moines for the purpose of supporting WLC today and in the future. The amount she gave was invested with the hopes that the fund will continue to grow in perpetuity, through its investment earnings. Thanks to Jem’s thoughtful planning and approach to giving, each year 5 percent of the fund will go to Women United.

Consider your options for planned giving based on giving amount, age, or assets. We will work with you to find a charitable plan that lets you provide for your family and support United Way.

“Because you’ve put that nest egg in place, that amount will last forever, beyond your lifetime," says Jem. "That’s such a powerful concept.”

The idea came from another Women United member around the time when Jem’s company stock had appreciated to more than double the amount at which she purchased it. She donated the stock as a lump sum, gaining a tax benefit on the total amount, while also earning a 25 percent Iowa state tax credit thanks to the Endow Iowa program available through the Community Foundation.

The hardest part of setting up a fund like this, Jem says, is thinking about giving that larger total up front to make the amount you give to charity each year worth it. Yet, setting up a fund in this way means you’ll have a greater impact over time.

Jem also continues contribute to her fund, so she can give even more each year. For her 40th birthday, she asked her friends and family to donate to the fund instead of giving her gifts. She also increases the amount she gives to United Way through her paycheck, giving at a Women United Lead level of $2,500 each year.

Her real legacy is the impact she’ll make on central Iowa kids by supporting nurturing learning environments that promote children’s healthy development and future success. “Education is what enables and propels people out of poverty,” she says. 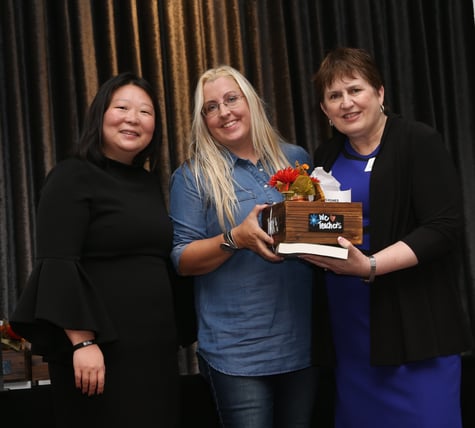 She knows the impact of having a quality education through her own experience. Her parents came to the U.S. from China when Jem was 9 years old. They didn’t have much money at that time, but they prioritized Jem’s education. Jem wants to make sure central Iowa kids, whose families might not be able to do the same, have that same chance.

While Jem can’t yet explain all the details of how her Community Foundation fund works to her 7-year-old daughter, she’s still teaching her about giving. Every Friday before Christmas, Jem takes the day off work and gives her daughter the $35 she would have spent on child care. Her daughter can then decide how much of that money she wants to give to a family with Easter Seals and Jem will match that amount.

Her model of giving, however, is a model for others in the community. “You are fast-forwarding 20 years of giving so it feels like a lot, but once you do it, you set it and forget it and it’s absolutely a legacy,” Jem says. “What’s your legacy?”