Finding words for a growing family 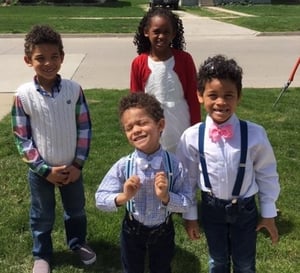 I share my story to support continued funding for Tracey’s work with my family and other families, and to show that there’s no right path to raising a family. It’s okay that our family looks different.

Four years ago, the Iowa Department of Human Services contacted me. My niece had run into trouble, and her four children needed a permanent home. My husband describes the moment in this way:

“It was a beautiful sunny day out and we were on our boat, and out in the distance, we could see four kids in the water and they were in distress. Do we look at each other and say, ‘What do we do?’ Or, do we pull them into our boat and figure it out later.”

The transition was difficult. We had already raised four kids, then teenagers and young adults. After 16 years of marriage, we were looking forward to settling into a slower pace and nearing retirement. The four young kids had experienced trauma and transitioned through several homes. They didn’t know how to express what they were feeling and had gone through.

I thought at that time: “Wow! This is a lot! … But if there’s something we could do, then we needed to try to do it.”

When two of the boys started preschool at Mitchell Early Learning Center in Des Moines they soon started acting up in different ways. Chase, the four-year-old, would cry a lot, while Mason, age 3, would hit people and run around.

Tears stream down my cheeks as I think about what it felt like knowing they were in such pain—acting out this way and even disrupting the class. I just felt sorry for them.

Then Tracey Campo-Westergaard, a school social worker, received a referral from Mason’s teacher. She created an intervention plan that the teacher, school staff, and we could implement. The plan focused on giving Mason tools for managing his emotions, like blowing on a pinwheel or breathing in and out when he was upset. Tracey also supported the kids with classroom lessons and small group social skills.