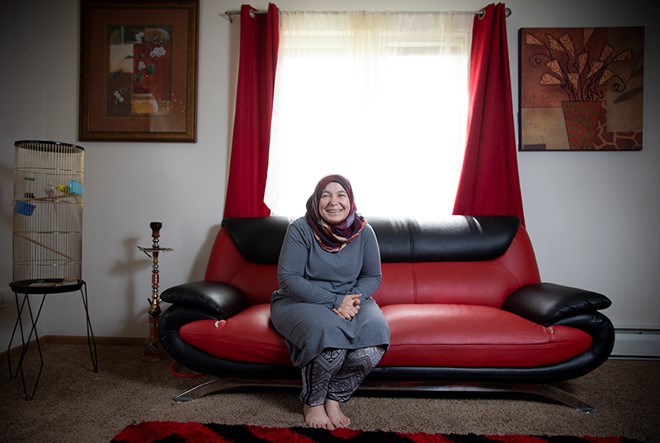 How we improve health

United Way of Central Iowa is working to improve the well-being of all central Iowans. To achieve our goal in Health, we look at all factors that impact health, including people's environment, financial well-being, and connections to others in the community.

After surviving war in her home country, battling cancer, and caring for four children as a single mother in a new country, Fadia says she feels like a newborn.

“I am going to start over to organize my life and build a new life here,” she says, speaking through an interpreter from her apartment living room in Waukee.

There are so many opportunities now.

Guiding her to those next steps was Ann Cochran with Dallas County Health Navigators, a United Way-funded partner. Ann first met Fadia as she was ready to turn the page on the many struggles she had faced. With Ann's initial help, Fadia and her children (a son in his 20s, another son in high school, and two daughters in elementary school) are now finding their own path in a new country.

"One of the gratifying things is to know that after our initial help, clients circle back and say, 'Hey, do you know that I know how to do this now? You showed me how to do this," says Ann. "That's the neat thing about this program. It's empowering people to handle their challenges as they arise."

The challenges today are much different than what Fadia and her family already have endured.

By the time the war in Syria began, Fadia’s husband had already left them and was working in Kuwait. Fadia feared he oldest son, then age 16, would be taken by those in the conflict, so she pushed him to leave for Turkey. The rest of the family joined him shortly after.

Life in Turkey was difficult, the family says. Fadia's two sons worked long hours. They had learned how to sew at their uncle’s tailoring business in Syria, but in Turkey, they had to take any job they could find. They worked 12-hour days, didn’t go to school, and found the language difficult to learn and the people they met often unhelpful.

After two and a half years, they were given the chance to come to the U.S.

October 2016 is a time the whole family remembers vividly. They describe arriving in the U.S. as “scary” and laugh at memory of that the feeling.

Fadia cried when she arrived. In Turkey, you could open your window and the next apartment was a half-meter away and below you was a bakery and everything else you needed, she says. In the U.S., everything was so spread out she wasn’t even sure where her children would go to school.

She soon found out that her husband had married another woman and was living in Lebanon. He continued to threaten Fadia to send him money and to sponsor his trip to the U.S., Fadia says.

Meanwhile, Fadia had no energy and would start bleeding when she was too active. She went to the doctor and learned she had a tumor that had to be treated with chemotherapy. Her two sons were forced to step in and keep the family going.

“She told us everything to do and we just did everything,” her second oldest son says. Now a high school student at Lincoln, he says that he used to have to remember everything for the family.

“I felt all the time I was the responsible one and I have to take care of my kids," Fadia says, "but when I was sick, he helped me go pick up medicine, take care of the home. He helped with rent.”

After seven months of living in Des Moines, Fadia and her family moved to an apartment in Waukee, just one block off a busy intersection on Hickman Road. Her eldest son works at Prairie Meadows Racetrack and Casino and is taking a course in fashion. Her second oldest goes to school and works part time as a tailor. The two youngest girls are in school in Waukee. 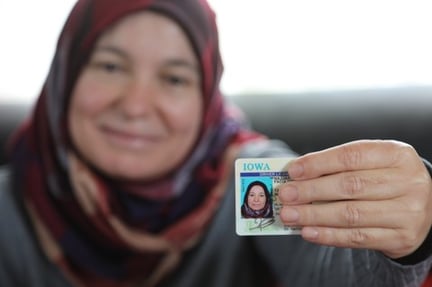 Fadia used to look out the window of her apartment and wait for her children to arrive home, but now they wait for her. A couple months ago, she earned her driver’s license with the help of Dallas County Health Navigators. Now, when her daughters go to school, Fadia drives to her school to learn English.

Fadia became connected with the Dallas County Public Health’s Health Navigation program in November 2017, after she was struggling to make her doctors’ appointments. Her sons were at work or at school and unable to take her, and she struggled to set up other options for transportation without speaking English.

When an individual is referred to the Health Navigators program, a case worker visits the home and completes an assessment to determine all of the family’s needs by looking at the social determinants of health, such as availability of resources to meet daily needs, access to education and job opportunities, and social support. The case worker helps with the family's immediate needs, as well as connecting the family to support in other areas that can improve health.

Fadia eventually chose to stop chemotherapy treatments, but continues to take an herbal pill once a day that she says makes her feel better. And as she’s started to feel better, she’s started to take steps to improve her own life and care for her family.

“After a while I rest all the time,” Fadia says. “Now I need to improve myself.” 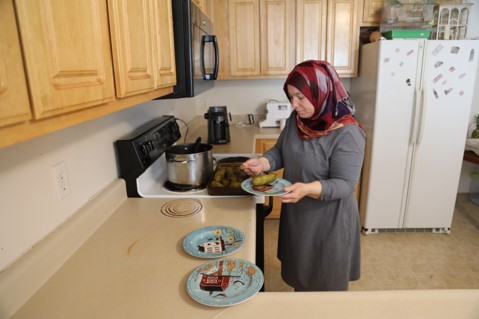 Ann helped Fadia gather information and fill out forms with Iowa Legal Aid to file for a divorce from her husband. Fadia’s case was accepted and she’s still waiting to be assigned a volunteer attorney.

Ann also helped Fadia obtain a cell phone so she is prepared when she receives the call from Iowa Legal Aid and can be in touch with her kids during the day. She then helped Fadia earn her driver’s license and enroll in English as Second Language classes.

All of these opportunities have changed what Fadia envisioned for her future when she wasn't allowed to finish school and became engaged to be married in Syria at age 13. She used to own a salon in Syria and now dreams of opening a catering business to share her traditional Syrian recipes, including zucchini stuffed with rice, meat and sauce. Or, she dreams, perhaps she'll become a nurse. In the near future, she wants to get her child care license to offer in-home child care for Syrian families--a job that will help her connect with others in the community.

Her family of five is settled in their apartment, with three birds who chirp and hop around the living room, prunes drying on a cloth on the kitchen table to make a traditional Syrian recipe, and her children coming and going from school and work.