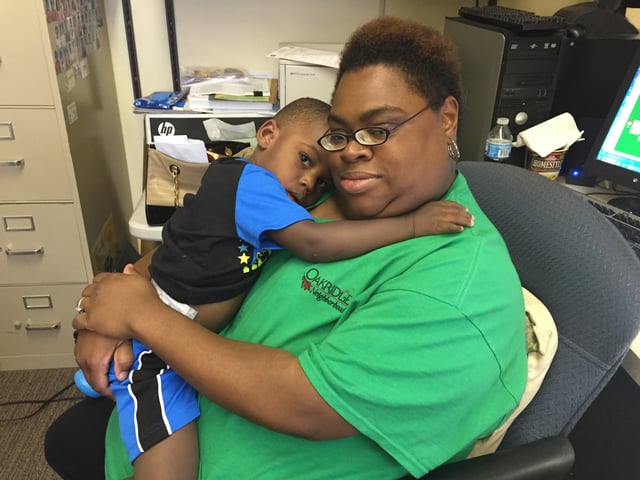 "It’s hard to think I had nowhere to lay my head. If it was just me, I could have dealt with it. But I had a baby.”

LaToya Smith and her 10-month-old son Brandon were homeless in Des Moines. She had just moved from Baltimore to work at Oak Academy—the early learning center at the United Way-supported Oakridge Neighborhood. But her housing plans had fallen through. With no place to go that was safe for a baby, LaToya called the one person she knew would help: Vicki Williams, director of Oak Academy.

“Miss Vicki did everything and anything she could to help us,” says LaToya. “I am truly grateful to her forever—because it was a struggle. It’s hard to think I had nowhere to lay my head. If it was just me, I could have dealt with it. But I had a baby.”

Vicki got LaToya and Brandon housing right across the street from Oak Academy—where LaToya had worked before she left Des Moines several years ago to care for her ailing mother. After her mother’s death, she had ended up in Baltimore with her husband. Eager to escape the violence and unrest of that city, LaToya had called her old boss to ask for a job. Her husband stayed behind in Maryland for a few extra weeks to work, while LaToya and Brandon traveled to Des Moines.

When LaToya’s housing plans collapsed, Vicki had no reservations about helping her former employee, who was famous for her work ethic.

“I got here on a Friday, and on Monday I started my first CPR classes,” LaToya recalls.

“I told Vicki: As soon as possible, get me in to start working—for my family.”

After surviving such a scary situation with her son, LaToya is even more motivated about helping the kids at Oak Academy, where she is an infant/toddler teacher. She helps the six-month-olds with their fine motor skills and the eight-month-olds learn to walk. One of her charges hadn’t learned to crawl yet—so LaToya went down on her knees to model the correct form.

“I have always loved working with kids and helping them have stability when their parents are away,” LaToya says.

“Parents leave us in charge of their kids when they go to work.
If you don’t have the heart and passion for it, you’re not helping
the child or the family.”

LaToya certainly has the passion for it—especially after seeing her son transform at Oak Academy. When they arrived, she was concerned about Brandon’s verbal development, but now he talks up a storm.

“The teachers did wonders with him. He’s really, really smart,” she says proudly.

LaToya calls her son—now two years old—her motivation in life. And she knows how hard life can get. When her mother died, LaToya was lost, alone, unemployed, and struggling with depression and addiction to pain pills. LaToya says her mom came to her in spirit and told her to be strong.

“I was down, and I was able to pick myself back up,” LaToya remembers.
“After I did that, I got my life together, got married, and brought
a beautiful child into this world.”

Even now, despite having a job she loves in the same building as her son—she struggles to keep her family afloat. Her husband is visually impaired, so LaToya takes care of him the way she did her mother. The family still doesn’t have a car, and LaToya sometimes waits for hours for transport to medical appointments. She dreams of a house with a backyard where Brandon can play.

“I want him to have everything and more,” she says.

With people like Vicki Williams and places like Oak Academy on her side, LaToya knows she is getting closer to those dreams.