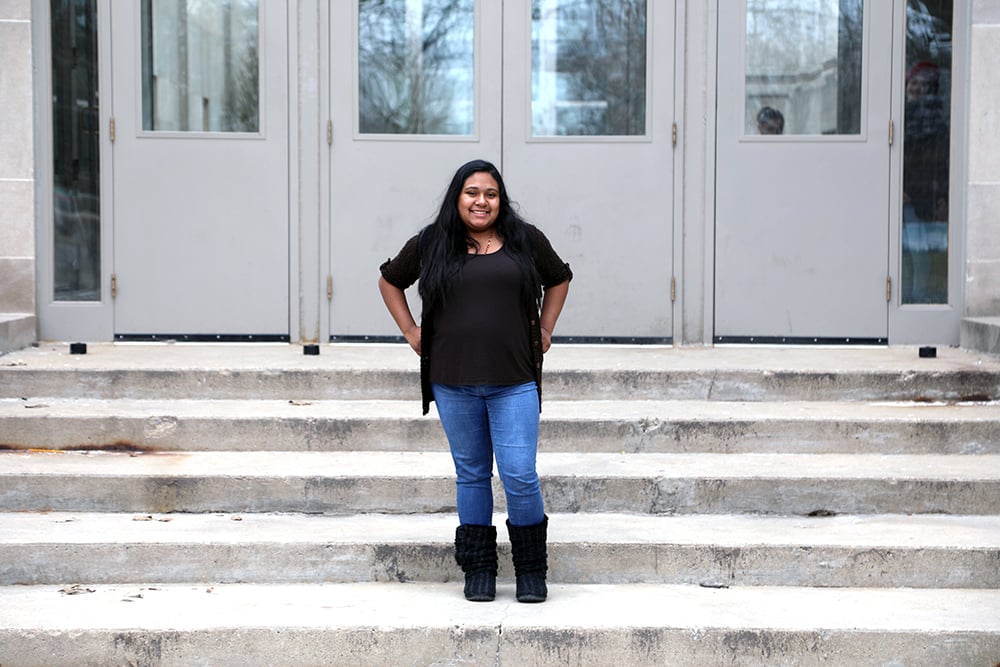 Missy Montero has missed a lot of school. Not just days, not just weeks, or even months. Added up over time, she has missed years of school.

But that’s not a surprise, given all she’s up against. What’s shocking is that she ever got to school at all. What’s astonishing is that she still keeps going every day she possibly can. And that, despite everything, she will graduate from high school in May.

Everyone Deserves a Chance to Graduate

United Way of Central Iowa is investing in education programs like Flex Academy to help the community reach its Goal for 2020: increase the central Iowa graduation rate to 95%.

Smile through the Pain

When you meet Missy Montero, the first thing you notice is her smile. After you’ve gotten to know her a little bit, you can’t stop thinking about that smile. You can’t help but ask yourself: How much can one 17-year-old go through with a smile on her face?

Missy was born in Fresno, California as the daughter of Mexican immigrants. She has two older brothers and four younger siblings. When she was just an infant sleeping with her mother, she started getting nosebleeds, but her mom thought she was hitting her head against the wall as she slept and moved her to the other side. The doctors said it was nothing. That answer would become a pattern over the next several years. 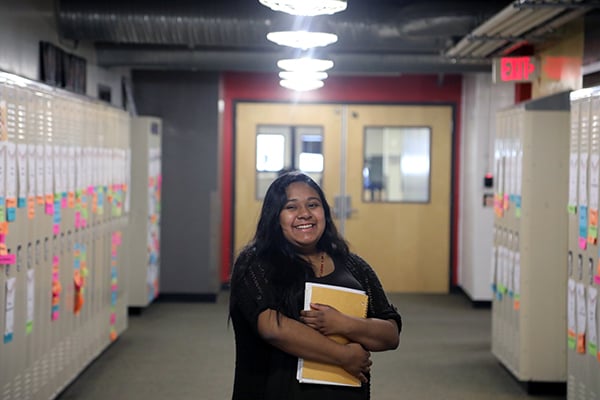 Missy’s family never stayed in one place for long, as her parents’ work required them to follow construction jobs and the farm seasons. When Missy was three, the family moved to Iowa, but they never made one town home—drifting between Tama, Toledo, Brooklyn, Marshalltown, and Montezuma every couple of years.

The moves made school difficult for Missy, since she had to continually get used to new teachers, new rules, new friends. Plus, she didn’t speak English until she started school at age 6. She learned most of the language by listening to the radio. In grade school, she took ELL classes and got extra help on tests, which she hated. She never liked feeling different from the other kids. She never was the kind of girl to ask for help.

But Missy needed help, not because of her language skills, which were coming along well. And not even because she was moving around so much. She was a social girl, and she made friends easily. The pain was her real problem.

“Since I was little, I’ve always struggled with my pain,” says Missy. “I was five years old when I started having muscle pain. Sometimes, when I was just lying down, I would feel these horrible aches in my bones.”

Everything came to a head when Missy turned 11. First, she was diagnosed with juvenile arthritis, an autoimmune disease that causes pain and swelling in the joints, among other symptoms. The diagnosis put a name to the pain she had been struggling with all her life.

Then, she underwent the first of two surgeries on her feet to fix the limp she had developed from her disease. She was in a cast for months—and ended up missing many weeks of school in the process. 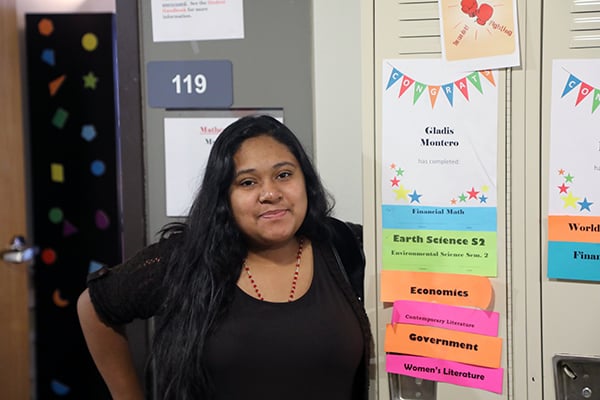 Lastly, her little sister was born. With her mom and stepdad each working 20 hours a day at labor-intensive jobs to make ends meet and her mom dealing with her own medical issues, 11-year-old Missy became the main caretaker for her infant sister.

Missy would sleep in the same room with her sister, waking up multiple times a night in the early months to feed her. Even when her sister grew, Missy would wake up at 5 a.m. to make a bottle, dress her, and get both of them ready for day care and school. She often had to leave school early to pick up her sister, and she was frequently called out of school for her sister’s appointments. Even when she made it to class, she sometimes fell asleep out of exhaustion—or pain.

Despite her struggles, Missy fought for herself and her family over the next few years. She developed bell's palsy that paralyzed half of her face and missed another two months of school. She had the surgery on her other foot. All the while, she cared for her little sister.

“I thought, you know what, my little sister needs me. I can get through this,” says Missy. “Nothing that has to do with my pain is going to stop me. If I want this, I fight for it.”

Two years ago, after spending her high school years at several schools, two important events occurred in Missy’s life. First, her niece was born, and she took over as the primary caregiver for the baby, while still raising her younger sister. Secondly, her family moved to Des Moines, and Missy enrolled at East High School.

With two young children to care for, Missy was absent from school more than ever. Plus, she had just been diagnosed with chronic migraines—labeling the horrible headaches that kept her in bed, drained her world of color, and turned light into shooting pain. None of her medications for juvenile arthritis seemed to be making a difference.

Missy was falling further and further behind her peers.

“I have to find a way to catch up to everybody else,” she thought at the time. “I want to graduate. I want to make a career I really like."

One of Missy’s older brothers dropped out of school and was working at a pizza factory, making little money and working unpredictable hours.

Something had to change. Since her health wasn’t getting better and her family needed her, she was going to have to ask the school for help. She always hated asking for help. 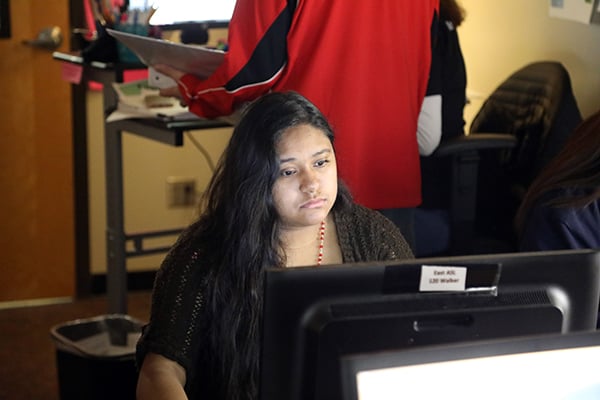 Missy’s counselor at East told her about Flex Academy, a United Way-funded program available at the five traditional Des Moines Public high schools. Flex Academy allows students to learn at their own pace, using online, offline, and blended instruction to recover credits and meet personalized learning goals. Students come to class when they are able but don’t fall behind when they miss days, because they have developed their own instructional plan in collaboration with a teacher.

“Flex Academy is important for students like Missy,” says Mimi Willoughby, academic pathways instructional coordinator with Des Moines Public Schools, “because when students have life obstacles that prevent them from coming to school, oftentimes they become detached from school. And the burden of school becomes another one of their obstacles. They can’t catch up fast enough.”

Missy took seven classes at Flex Academy over the course of six months, speeding through some and taking her time with the ones she needed to. She loved working at her own pace and appreciated that she could work online at home when necessary.

“Basically, you can say I live school at home, because it doesn’t matter where I’m at, I’m always focusing on school,” Missy says.

At first, Missy wanted to stare at the computer screen and shrug off the teachers’ support. She didn’t like the individual attention, their questions and smiles. But when her anxiety was driving her out of the classroom again and again, she turned to a teacher for help. He offered her an empty classroom to study when she needed it. And he taught her how to work in a quiet, busy space without feeling overwhelmed.

Each student gets their own individual experience at Flex Academy.

“We can support Missy for her,” says Willoughby. “It doesn’t have to be whatever everybody else needs. Her goals, her dreams, and her struggles are visible for her and for everybody that she opens up to.”

Willoughby emphasizes that the students in Flex Academy are going through extreme life challenges, such as Missy’s health issues. The normal educational track, which is great for most students, might make Missy choose between her health and school. Flex Academy, on the other hand, can support both.

“The students in Flex Academy are the most courageous, inspiring, resilient students in our community, says Willoughby. “They have a lot to offer. And I think they are going to make the best employees.” 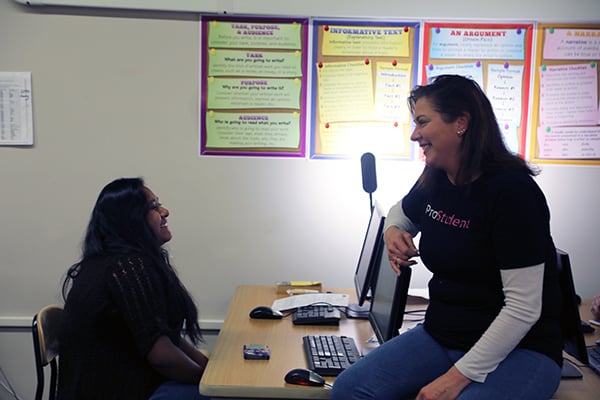 With the seven courses she took at Flex Academy, Missy earned essential credits she needed for a high school diploma.

Missy was still a few credits short, though, so she looked for help again. This time, her counselor told her about the core diploma, an innovation that was brought to DMPS by Willoughby, whose position is funded by United Way. The core diploma allows students with hardships to graduate with just 18 credits instead of 23, allowing them to cut five elective courses. They must still take all the core English, math, science, and social studies classes, take four elective credits, and have a viable postsecondary plan. But students like Missy, who struggle with life circumstances out of their control, can now graduate with their peers rather than dropping out, as many of them did before.

Missy was approved for the core diploma. With the credits she made up during Flex Academy, she was just one credit short of graduation. She is taking that class during the spring semester and will graduate in May. 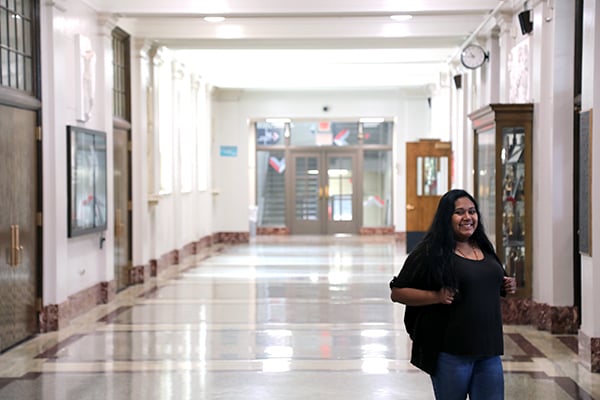 Once worried she’d never finish school, Missy is now dreaming of her future after graduation. Her health is starting to improve on new medications, and she finds it easier to get out of bed every day. But that is not what’s keeping her going.

Missy has always loved to write and enjoys making up stories for her younger sister and niece. She dreams of being a writer someday. But a more immediate plan is taking shape in her head right now, one she has imagined for years: becoming a nurse.

“There’s something inside me that wants to help people,” she says.

That’s a value she has learned over time, after years of refusing or not asking for help. Now, she knows the power of support and she wants to pass it on to others.

Most importantly, Missy wants a career that can support herself and her family. Seeing her mom and stepdad come home from the fields or factory at 3 a.m. exhausted and in pain, only to leave at 6 a.m. for another job, has given her an urgent perspective on gaining the education and career training her parents never had the chance to get.

“I ask myself every day: ‘Do you want to be like them? Keep working in the fields? Be out in the sun and dehydrated?’ I always tell myself: I want to see a better future for myself and for my future kids, for my siblings.”

When Missy walks across the stage in May, she can be confident that her determination to graduate has set up her for that future.

Nothing will be able to wipe the smile off her face that day.

“It doesn’t matter what happens,” Missy says. “Always look forward. Just never give up, because there are better things on the way."