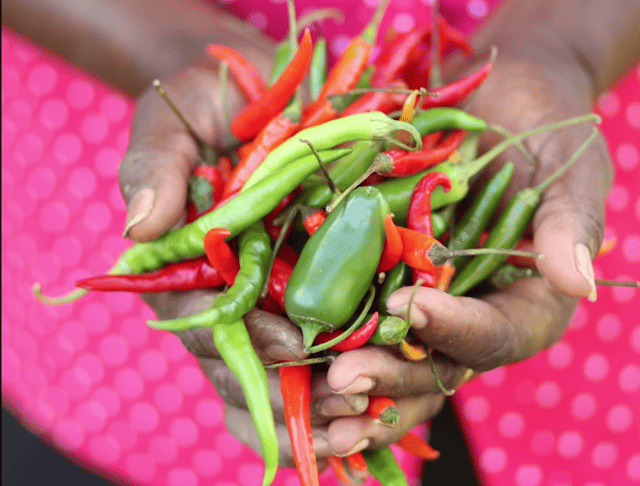 “Farming makes me feel very good. If you plant food yourself, you help your family. It makes me remember Africa and what my parents did.”

Marie Kashindi may not speak English very well, but she is fluent in farming. The produce seems to grow at the very sound of her voice. She coaxes life into well-known American crops like sweet corn, green beans, lettuce and tomatoes, as well as plants from her native homeland in central Africa.

Born to the Burundi parents who had fled the 1972 genocide to a refugee camp in Democratic Republic of Congo, Marie learned how to plant, weed, harvest and sell as she worked alongside her mother and father. Whatever didn’t go to feed the family, they sold for a little extra income.

“We would carry all of our food on our heads to the
market and sell the food,” she says.

Marie grew up in the Congolese refugee camp and got married. She may have lived out a peaceful—if hard-scrabble—life on the land if the camp was not attacked in the mid-1990s. In that attack, Marie lost both her parents and her brother. Fortunately, both she and her husband made it out alive—and got to another refugee camp in Tanzania. There, she bore five children—four of whom survived. Again, she found sustenance and solace in farming.

After years of heartbreak and trauma, the Kashindi family
got good news: They would be resettled in the United States. 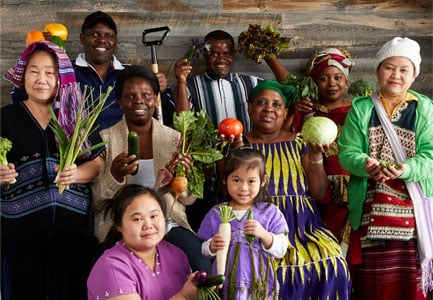 The family arrived in Des Moines in 2008. Her husband got a job; her children enrolled in school and grew fluent in English. Things were going well, but something was missing for Marie. Living in a city, she had no place to grow food for her family, no soil to dirty her hands and soothe her soul.

After a few years without a chance to practice her skills, Marie was able to connect with a community garden. But her plot wasn’t big enough to meet her needs. Fortunately, Lutheran Services in Iowa (LSI) offered her a place in their Global Greens program—funded in part by United Way—which provides land and seeds to refugee farmers at a farm in West Des Moines.

This year, Marie graduated to an even bigger plot: 50 by 50 feet—and she is finally able to garden on the scale that she was used to. Just like her parents did, she grows healthy food to feed her children. The rest she sells at the Downtown and Plymouth Church farmers markets.

“Farming makes me feel very good,” Marie says.
“If you plant food yourself, you help your family.
It makes me remember Africa and what my parents did.”

Marie works several hours a day in her garden during the spring, summer and fall, and often her kids accompany her. Emulating her parents’ lessons, she teaches them to plant, weed and harvest. She laughs good-naturedly when they pull vegetables they think are weeds. But she makes sure they know the difference in the future.

I like the fact that we as a family work together to get this done,” says Marie’s teenage daughter Clementine. “And I have some benefits from it too. At the market, we learn how to sell stuff and get more customers to our area.”

The money Marie earns from selling her food goes to help support her family, but she also invests in more seeds and equipment to help grow her harvest. She’d like to farm even more land—and plans to grow as large as she can.

“I am really proud of her,” says Clementine. “She spends a lot of time coming here and trying to provide for our family. It’s just awesome.”