Chase and Jose: A Book Buddy friendship that led to positive change 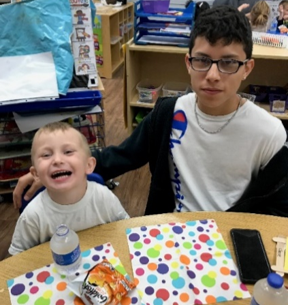 Chase and his twin brother were three years old when they entered the Shared Visions program at Perry Child Development Center. Chase is outgoing and eager to take charge – often answering for his twin. With that, he sometimes struggles to comply with standard classroom rules and expectations.

With Book Buddy being new to the Perry Child Development Center, and the kids being a little younger than the typical “buddy,” staff were unsure if the program would be successful. But as the first couple of weeks got underway, Chase and his fellow students looked forward to when their Book Buddy friends would come.

Just as the staff needed to work out the “kinks” of a new program, Chase also had to work through some adjustments. At first, he was eager to be up, moving, and interacting with someone new. But as time passed, he started to show more interest which turned into excitement when he’d see Jose, his Book Buddy, walk in the door.

Jose, a local high school student, was also new to the Book Buddy program. At first, he was a little uncertain about reading with kids. Despite their hesitations, they both learned to trust one another, gained invaluable lifelong skills, and created a friendship throughout the school year.

“I experienced first-hand how to interact with younger children and how to help them learn in a way they can understand,” Jose said. “I had a great experience bonding and building friendships with Chase and other preschoolers. When I would walk in the class, kids would run up to me and give me a hug or a high five. They did more than reading, they learned how to get closer with me and be themselves.”

As the school year continued, Chase became more involved and engaged during regular classroom time. When reading independently or with the class, he would make connections from stories to real-life events. At the age of three, he recognized letters and their associated sounds. Though the students are exposed to several types of learning experiences throughout the day, Chase’s teachers reported that having the one-on-one experience with Book Buddy has furthered Chase’s literacy skills and social interactions.

“It helps more than the students,” Jose said. “The skills I gained from Book Buddy helped me with my reading, too, and it taught me how to build friendships with and teach younger kids. I would like to do it again next year!”

Funding from United Way of Central Iowa’s Women United allows Tracey to work full time at Mitchell Early Learning Center, offering support to all students and working with about one-half of the 400 students in smaller settings. She works on social and emotional learning with skills like how to listen, follow directions, problem solve, express feelings, and maintain friendships.
“When we have challenging behaviors, that can get in the way of academics,” Tracey says. “We have to make sure we’re always addressing the behavior, so it doesn’t impede learning.”
The funding from Women United “means everything because truly we’re available all the time to families, to students, to teachers,” says Tracey. “We don’t have to necessarily refer out. We can do a lot of things at the school.”