Behind a house just north of downtown is a small greenhouse hut filled with black plastic trays on shelves and the dirt ground. In those trays grow tiny leafy plants that will soon become eggplant, broccoli, lettuce, carrots, and more.

For Bizimana Charles, planting season started in February, and by the time the weather warms up, he’ll spend long days at his two-acre farm in Altoona planting, weeding, and then, eventually, harvesting his produce--the same kinds of activities his parents did when they lived in Burundi, Africa, when Bizimana was born 50 years ago.

Program impacts all factors of health

Health involves more than eating well and exercising. It includes having a sense of purpose, financial stability, and a safe community with opportunities to make healthy choices. Join United Way of Central Iowa in the fight to improve central Iowa's well-being through programs like Global Greens.

The Global Greens program, funded by United Way of Central Iowa and housed at Lutheran Services in Iowa, secured the Altoona land for Bizimana to farm and has supported Bizimana in scaling up his operation from a small community garden into growing enough produce to sell at the Downtown Farmers’ Market under the name Eating Well Farm.

The farm is not only a job opportunity, but it’s also a way for Bizimana and his family to eat healthy, enjoy the foods they were used to eating in Africa, and to feel a sense of purpose in their lives.

“We were happy to eat something we grew ourselves,” he says, “and what is fresh and the amount we need. I like being my own boss.”

Bizimana’s parents used to own enough land to feed themselves and others. But four years after Bizimana was born, war broke out in Burundi and people fled in all directions.

Drawing a map on a piece of paper, Bizimana explains how his family landed in Congo on a small plot of land, where they lived from 1972-1996. Then war broke out in Congo and some of Bizimana’s family, including his parents, fled back to Burundi, while Bizimana went to Tanzania.

He ended up in a refugee camp for more than a decade, living with his brother’s family and raising two children after his wife left with their youngest son and remarried. It was difficult to secure good land in the camp, but he could grow tomatoes, onions, and other small plants on a plot the size of a table with thin soil. Most of the time, Bizimana was busy teaching outside the camp, making a salary between $9 and $15 a month.

After 30 years of living outside of Burundi, he and his two children were granted refugee status and began the resettlement process to America.

Bizimana remembers exact dates, including August 18, 2009, the day his family left Africa. The idea of traveling to the U.S. fascinated him. He’d learned about airplanes in school and wanted to see how it all worked, but he’d also heard the news of a recent plane crash that had killed passengers on board. Bizimana didn’t sleep for the three-day trip from Tanzania to Kenya, Kenya to London, London to New York, New York to Chicago, and Chicago to Des Moines. 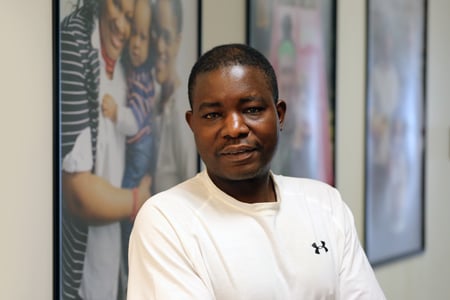 When he and his two sons arrived in Des Moines, there was no one at the airport to pick them up. He knew English, but it was a British version of English and his accent made it difficult for people to understand him. Then he remembered a card he’d received with a number to call. Someone with LSI’s Refugee Community Services picked him up and helped him find his way to an apartment off Hickman Road in Des Moines.

There, Bizimana found one of his former students from Africa, who offered to cook for his family for the week, and soon Bizimana met a community of other Burundi refugees who’d been arriving over the past two years.

LSI’s refugee center also helped Bizimana secure a job in housekeeping and navigate the bus system, but it was difficult for him and his family to adjust, especially to the cold winter.

He also quickly learned that he could not find the same produce he was used to eating in Africa and that much of the food available was full of sugar. Over time, he figured out that most adult family members in the Burundi community were being diagnosed with diabetes, including himself two years after he arrived.

“When I arrived, they (LSI) were asking how the life was in Africa,” Bizimana says. “Most of us were saying us, including our parents, were farmers. Then LSI decided to find land for those refugees who wanted to farm and eat the food they were eating in Africa.”

Bizimana was one of the first farmers to join the LSI Global Greens program. They each started with 50x50 foot plot, which was enough for his family to begin eating produce regularly.

“You go to the store, you have to see how much money you have,” he says, “but if you grow the produce yourself, you save any amount you want.”

After two years, Bizimana had the chance to move to a quarter acre plot, which led to enough produce to eat at home and have a little extra to sell. Slowly, he began to sell through LSI’s Community Supported Agriculture (CSA). Now, he is on his third summer growing at the Altoona location, with two acres of land.

Moving to Altoona meant taking out a loan and turning his gardening into a larger farm operation. Now Bizimana works full time at his land spring through fall, selling at LSI’s CSA, the Downtown Farmer’s Market, and other locations. In the winter, he picks up shifts as a PRN at a facility serving individuals with disabilities.

Bizimana’s expansion into farming has been slow, because he has to balance between earning enough to pay rent and having time to do everything at the farm. He doesn’t have enough help to keep up and expand with all of farming's demands.

Throughout his journey, LSI has provided training, especially on how to grow crops in America, how to run a business, and how to set up systems to be more efficient. It’s provided support as a group of farmers have scaled the size of the land they manage and provided tours of other farms and support in managing operations.

“Bizimana is a really thoughtful person, so he doesn’t make decisions hastily,” says Zach Couture, land and production specialist with LSI Global Greens. “Even though a couple other people went off site, he wanted to stay another year to practice on the quarter acre. He wanted to make sure he knew how to set up his irrigation system properly on a small plot, use a black fabric barrier to take care of weeds instead of hoeing. He’s always been willing to adopt new practices.”

Bizimana says he weighed whether he should pursue farming and passed on the opportunity to expand for two years, but then one of his friend pointed out: “I kept being the one to interpret at meetings and grasped what was going on better than others in the group.” He encouraged Bizimana to expand.

“That was the time I can say my business started,” he said.

When Bizimana arrived in the U.S., he found a Burundi community that had been established over two years as refugees arrived. They helped him with needs like getting to doctors’ appointments or finding food.

One day Bizimana joined a group that went to the Iowa Department of Transportation to take the test for a driver’s permit. He was interested in the process and the next time a group went, he tried taking the test. He passed, missing just one question.

That’s how Bizimana’s learning process works: Someone shows him how to do it once and then he tries it for himself.

After he passed the driver’s test in just one try, others in the Burundi community started to ask Bizimana to tutor them. In that first group, he met Joseline who would become his wife. She was also from Burundi and had fled to Rwanda when war broke out, ending up in a different refugee camp before resettling in the U.S.

“We are many communities in Des Moines,” Bizimana says. “most of them, we know each other.”

Today, Bizimana and his wife raise three children, ages 5, 4, and 2, in a house they own in Des Moines. Bizimana’s two older boys, now ages 28 and 26, also live in Des Moines and his oldest helps with the farm. His wife received her child care license from LSI and stays home to raise their three kids while providing care for two additional children for extra income.

When he needs to be, Bizimana is at his farm, but his phone rings constantly with people from his family or others in his community who need help, such as the time a friend got in a car accident and he had to drive across town to translate with the police. He used to interpret for LSI, knowing four languages, but stopped when it took too much time from farming.

“He’s really involved in the community, so people in the Burundi community go to him when they have questions,” says Zach. “That’s why we chose him for the first cohort of business development. I figured if he could figure it out, he could teach other people, too.”

Bizimana hopes he can scale his farm even bigger, but needs more help beyond his son occasionally coming out there. “Because I work by myself, it is difficult to have many produce or big amount to take to the market,” he says.

He also is starting the process late, with little time to pay back his loan and then make money off the land before he cannot farm any longer. “I will keep farming until my body says we are not able to do this,” he says. “Then I will stop.”

But the process of farming comes with many benefits. He’s his own boss and receives money as soon as he sells his produce rather than waiting for a paycheck and he spends his summers healthier.

“I think maybe the problem of sickness we have is consequence of the life in America; we are not active,” he says, explaining how he used to walk more than an hour to get to school each way in Africa and worked hard to haul resources home.

When he’s farming, he doesn’t take any medication for diabetes but when he stops, his blood sugar spikes.

“People are very motivated to keep farming and prioritize farming as an important part of their lives,” says Zach, who noted that there’s now 250-300 gardeners in the Global Greens program. “It’s what they grew up doing and if you ask people what they enjoy most about the garden, the things they enjoy most, they remember working on the farm with their parents or their grandparents in Africa.”