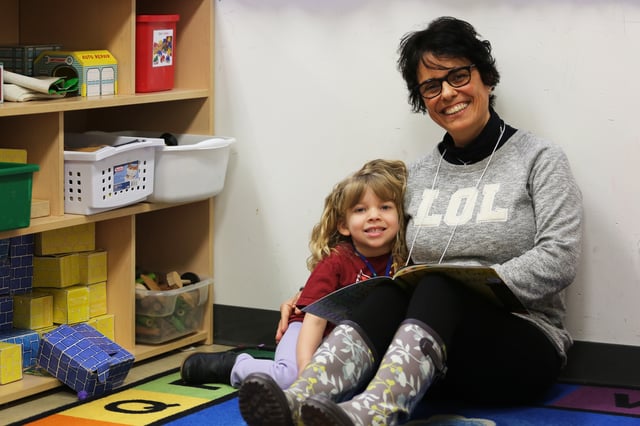 When Gema Garcia started volunteering with Book Buddy, she wasn’t sure it was going to work out. Her fears were redoubled early on when the children couldn’t understand her saying the word “worm.” Frustrated, she pointed to the picture and said “gusano” in Spanish. The children immediately understood.

After witnessing this, the site coordinator at Conmigo Early Education Center, where Gema volunteers, told her she could read in English or Spanish. Conmigo is a bilingual center, and all of the children learn and speak in both languages. For Gema, this was a huge relief—and a huge opportunity.

Originally from Spain, Gema and her husband have lived in Ankeny for three years, after he was transferred here with John Deere. Before moving to Iowa, they lived in Brazil for four years. An economist in Spain, Gema is always looking for ways to fill her free time here. Although studying English and U.S history and learning piano are fulfilling, she especially enjoys volunteering with children, as she did in Brazil.

Hundreds of Central Iowa four-year-olds are at risk of not gaining the skills they need to start kindergarten, and research shows children who start behind, stay behind.

Book Buddy reaches children in the critical year before kindergarten, helping them build pre-reading skills for a strong start in school. For 40 minutes a week, volunteers read one-on-one with 4-year-old students at early childhood centers in Des Moines.

A co-worker of her husband introduced her to United Way and the Book Buddy program, where volunteers read with 4-year-olds on a weekly basis to teach the print literacy skills they need for kindergarten.

When Gema came to the first Book Buddy orientation, she was blown away. “My gosh, this place is a paradise compared to Brazil,” she says. She is especially impressed with Conmigo’s bilingual education system.

“The kids are very fortunate to have the opportunity of studying in two languages,” she says. “In the future, they are going to appreciate it."

"It’s one of the best features of life: to communicate with different people in their own languages.”

During the half-hour sessions, Gema reads and speaks to the kids she works with in both English and Spanish, depending on their fluency levels in each.

“For all of them, at the end of the day, I think this program is important,” she reflects. “They are improving and learning about how books work. It’s a nice way to open a new world for them.”

Gema is grateful for United Way for providing this opportunity for the kids—and for the volunteers. She is happy to have found the program—and to have found it so easy to participate.

“There are few things in life that can give you as much satisfaction as helping another person."

Conmigo is happy to have her as a Book Buddy, too, because they are always looking for bilingual volunteers.

“It’s funny because I am learning English with the kids,” Gema says with a laugh. “It’s perfect for everybody.”