DAY 2:
THE EFFECTS OF RACISM

“Americans believe in the reality of ‘race’ as a defined, indubitable feature of the natural world. Racism—the need to ascribe bone-deep features to people and then humiliate, reduce, and destroy them—inevitably follows from this inalterable condition. In this way, racism is rendered as the innocent daughter of Mother Nature, and one is left to deplore the Middle Passage or Trail of Tears the way one deplores an earthquake, a tornado, or any other phenomenon that can be cast as beyond the handiwork of men. But race is the child of racism, not the father.”

As you look around our community, are you seeing and addressing how racism operates at different levels? Dr. Camara Jones, Senior Fellow at the Morehouse School of Medicine, says that in order to address racism effectively, we have to understand how it operates at multiple levels. Often what people think of first and foremost is interpersonal racism. Only seeing this level means that we fail to see the full picture that keeps the system of racism in place. The graphic below illustrates all the domains in which racism operates. 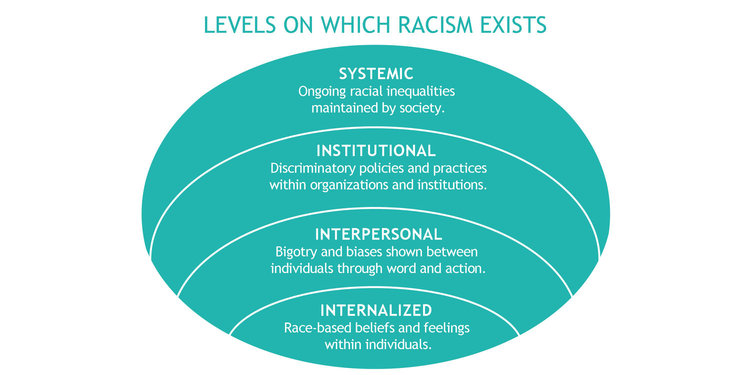 Read the article Historical Foundations Of Race from the National Museum of African American History and Culture. The term “race,” used infrequently before the 1500s, was used to identify groups of people with a kinship or group connection. The modern-day use of the term “race” is a human invention.

Watch the video Systemic Racism Explained (4:23) by act.tv. Systemic racism is evident in every area of life in the U.S., with disparities in family wealth, incarceration rates, political representation, education, and other areas.  Trying to solve these problems requires changes in major parts of our system. Here's a closer look at what systemic racism is, and how we can solve it.

Check out Season 2, Episode 2  How Race Was Made (29:21) of the Seeing White podcast. Radio host and producer John Biewen, along with an array of leading scholars, takes a deep dive into the questions: Where did the notion of “whiteness” come from? What does it mean? What is whiteness for?

“In 1880, Tanner became the first Black student to attend the Philadelphia Academy of Fine Arts. Upon leaving school and after teaching in Atlanta for a few years, he left the United States for Paris to find a career that was not available to him in the United States because of his race. This signature painting merges abstraction, mysticism, and elements of the Impressionist movement he discovered in Europe.”