“Redlining was not officially outlawed until 1968, by the Fair Housing Act. By then the damage was done - and reports of redlining by banks have continued.”

Solid Ground defines Institutional Racism as “the systematic distribution of resources, power and opportunity in our society to the benefit of people who are white and the exclusion of people of color.” It has led to such issues as discrimination and segregation.

When you hear the word segregation, what comes to mind? Many of us think back to the Civil Rights Movement and stop there. Yet, many American counties are segregated today, and Polk County is no different. See the chart below, which shows the vast majority of black students are enrolled in the Des Moines Public School District. 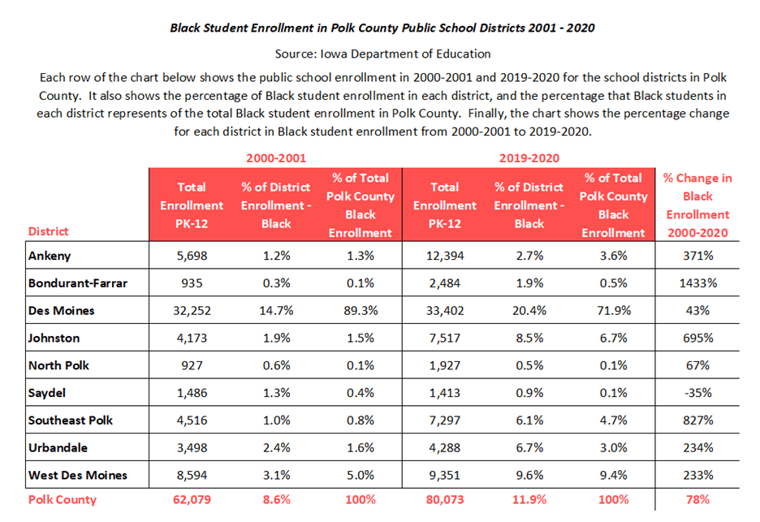 Present-day racism was built on a long history of racially distributed resources and ideas that shape our view of ourselves and others. It is a hierarchical system that comes with a broad range of policies and institutions that keep it in place. Policies shaped by institutional racism that enforce segregation include redlining, predatory lending, the exclusion of Black veterans from the G.I. bill, and the forced segregation of neighborhoods by the Federal Housing Authority. As a result of institutional racism, racial stratification and inequities persist in employment, housing, education, healthcare, government, and other sectors.

Racial disparities persist, with little evidence of the gaps narrowing for Black Polk County. This means that, sometimes, people in our community have a closer and different perception of our overall economic quality of life, leading to “The Tale of Two Cities.” Explore racial disparities in Polk County and Des Moines, and learn strategies for change in the Executive Summary of One Economy report.

Watch Clark 150, a continuing legacy, a documentary from Drake University about the Clark Decision which desegregated Iowa schools in 1868. To learn more about the decision, visit Drake Law. (23:15)

Segregation still impacts our communities and our nation even decades after it was legally banned. Read more from The Economist about how segregation exists today in cities across America and the costly impact it has on the future of our communities.

Give voice to issues in your community and lend support by attending a school board meeting or attending a planning and zoning committee meeting.

"When the powers that be take everything away from you, the only thing left is your own creative expression, what you have in your mind. As the author Hirasuna points out, these artworks were made by incarcerated people who hadn’t been charged with or convicted of any crimes. In The Art of Gaman, she writes, “All these lovely objects were made by prisoners in concentration camps, surrounded by barbed wire fences, guarded by soldiers in watchtowers, with guns pointing down at them.”