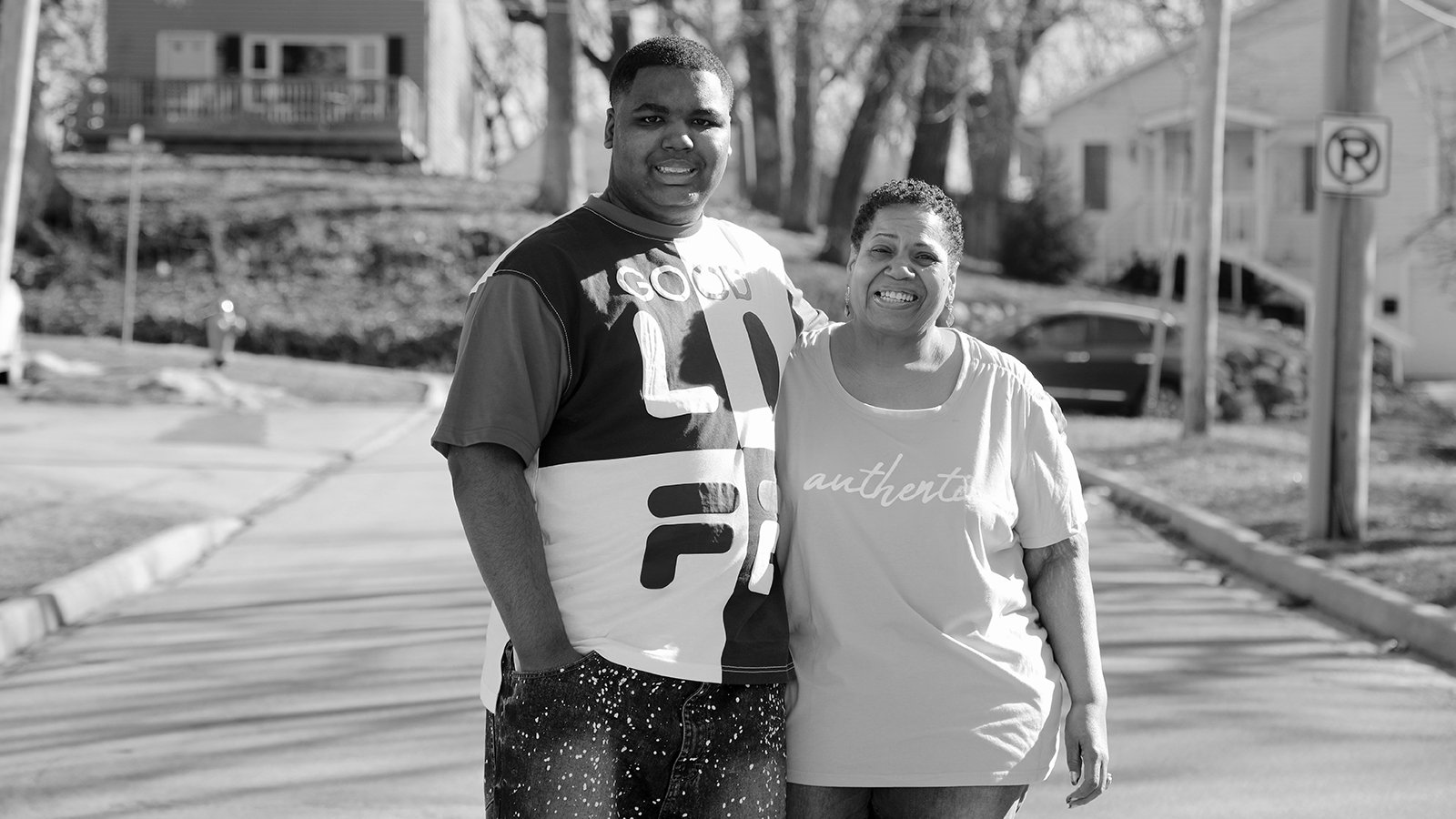 Last November, 15-year-old Jontavious Logan of Des Moines entered a manic state. Diagnosed with autism and oppositional defiant disorder (ODD), Jontavious can sometimes hurt himself and others close to him when he’s manic. That evening, he became aggressive, pushing his younger brother and then storming out of the house. His family, worried for his safety and having no other options, called the police.

When the officers on duty responded, Jontavious’ mother was pulling on him, trying to stop him from leaving the yard. At 6-foot-2, he can move his mom around just by pulling back. Seeing what they thought was a dangerous physical fight in progress, the officers pointed their guns at Jontavious, handcuffed him, and put him in their police car. Hysterical, he was screaming in the backseat.

Jontavious' grandmother Antoinette, his caretaker and legal guardian, was sobbing on the other end of the phone with family members.

"My anxiety was over the roof,” recalls Antoinette. “In my mind, I was thinking: They could shoot him, not knowing what the situation really is. He’s a kid, but he looks like a grown man. My heart was going crazy, because this has happened before in America.”

Fortunately, nothing tragic occurred that night. Jontavious’ uncle explained the situation to the officers, noting his age and mental illness. They let him out of the car and calmed everyone down.

Antoinette doesn't blame the Des Moines Police for the incident. In fact, she has had to call them many times during Jontavious' childhood and adolescence, and every time before, they successfully defused the situation. Jontavious will listen to police officers while in a manic state much better than he will listen to family members. His grandmother has had to rely on the police as a stopgap measure in the fight against mental illness.

Many other families in Polk County face a similar situation. The CDC estimates that up to one in five kids nationwide experiences a mental disorder during any given year. When a child gets into a manic or psychotic state that is dangerous to themselves or others, families are often forced to call the police, who are not mental health professionals and who have other public safety priorities. Or they may go to an emergency room, which are not equipped to handle children with mental health problems.

“Few options exist for families dealing with a child who is experiencing a mental health crisis,” says Anne Starr, CEO of Orchard Place, a local nonprofit that provides mental health treatment for kids. United Way helps fund many of their services.

Orchard Place is leading the charge to create another option for children experiencing mental health crises in Polk County, with support from many in the community, including United Way of Central Iowa and the Des Moines Police Department.

A Potential Solution for Families

Mental health providers in central Iowa have known for more than a decade that we have a problem with crisis response in our community. United Way even brought in national consultants from Boston four years ago to make a recommendation.

A task force of 40 stakeholders was formed in spring 2016, with Orchard Place as the lead. They based their plan on Foundation 2 Crisis Services in Cedar Rapids, which has proven effective in both urban and rural environments and been recognized nationally.

Here’s how those recommendations would work to create a crisis-response system: Within an hour of a call to the hotline, a pair of expert responders would arrive at the family’s home. One would work with the child to de-escalate their mental health crisis. Another, in a separate room, would talk to the family, asking questions and providing education. This model treats the whole family, not just the child.

After the visit, within 24 to 48 hours, staff would make a follow-up call to schedule a visit to a mental health provider and inquire about other family needs. Scheduling provider visits for families is an essential part of the program.

“Getting services started is difficult for parents to navigate,” says Starr. “And wait times to have a child see a mental health professional may take weeks. Scheduling a psychiatric appointment may take months.”

The care coordination through the crisis response program would schedule all these appointments quickly, ensuring that providers take the family’s insurance or Medicaid and that the family could afford associated fees.

The third aspect of the program, the crisis stabilization centers, would have a warm and welcoming atmosphere. They would only serve children and youth under age 18, no adults. The typical stay would be around 2-5 days, with 24-hour nursing and a medical professional who can prescribe medication on staff.

Because all central Iowans deserve safe and healthy lives, United Way provided funding for the children’s mental health crisis program under our Health priority for the 2019-2020 fiscal year.

"Preventing and promoting healthy mental development and health are critical to overall well-being," says Erin Drinnin, community impact officer of health at United Way of Central Iowa. "When families are in crisis in central Iowa, they often don’t know where to turn or who can help. We are excited about the way the community has come together to plan for effective ways to get families the help they need so they can get back to school, work, and life."

In our current system, families in central Iowa call the police for mental health reasons every week. Starr says almost every parent she has talked to has had to call at least once, if not more.

“The first thing the child thinks is: I’m in trouble. I’m a bad kid. I’m going to jail,” she explains. “It doesn’t matter how sympathetic the police were, it was still traumatic. It criminalizes mental illness. It adds to the stigma.”

Police are doing the best they can with a complex, intractable problem. And because they only have law enforcement and legal tools, they can’t do what trained medical professionals can.

“Police are our first line VIPs,” says Starr. “They need assistance. Their business is keeping the community safe. They want to hand this off to someone they trust."

During the past year, Starr and others on the task force have met with representatives from the Des Moines Police Department, including Chief Dana Wingert, as well as members of the local Law Enforcement Executive Association. She has also been meeting with fire departments and other first responders, Des Moines Public Schools, the juvenile court, all three major local health systems/hospitals, mental health providers, and many other organizations in the community. Everyone she has talked to has expressed enthusiasm.

In a letter of support, Chief Wingert of the Des Moines Police writes the following: “Thousands of citizens in central Iowa suffer from some level of mental illness. Sadly, law enforcement frequently becomes the first contact with those in crisis, as the 911 system is often times the only option. Although crisis intervention training for police officers has greatly enhanced our ability to deal with these issues, the fact remains that we are not clinical professionals.”

He goes on: “The Reach Out Youth Crisis Support program providing a 24-hour hotline, 24-hour mobile crisis response and care coordination proposed and led by Orchard Place is a tremendous enhancement in filling that gap. As president of the Des Moines metro area Law Enforcement Executive Association (PLEXA), our organization supports the implementation of this initiative.”

The Future of Our Kids

Starr and the task force, of which United Way is a member, continue to look for more funding as part of a public-private partnership. Starr believes that the program should be the “shared responsibility of the government and the community.”

When the one-cent sales tax was passed this spring, the city of Des Moines promised to invest some of those funds in six identified priorities raised by the community through A Mid-Iowa Organizing Strategy (AMOS), including mobile mental health crisis response. However, that commitment has not yet been acted upon. Starr is meeting with the city government for discussion about the issue.

Now the task force’s goal and focus are those state funding initiatives that will be discussed during the 2020 legislative session, when many groups, including United Way, will also be advocating for funding for the statewide children’s mental health system, the structure of which was put in place last year.

“Our state must look for opportunities to leverage predictable, stable funding to support children’s mental health that have proven successful in order to fix the current, inequitable patchwork of services offered in Iowa,” says Dave Stone, Advocacy Officer at United Way of Central Iowa.

"The Legislature took a great first step last year passing legislation to begin creating a children’s mental health system," says Erin. "Now we need to ensure funding streams exist so that everyone can access the services and support they need from birth to end of life."

Mental health is key to the health and success of our entire state. When children’s mental health needs are met, they are more likely to perform better in school, graduate, and become healthy, productive adults in our community.

When more money comes through for Reach Out Youth Crisis Support, they hope to start serving small numbers of families through mobile crisis response by late 2020, ramping up in 2021. They are waiting to begin fundraising for the third priority—the crisis stabilization centers—until a later date.

Meanwhile, the task force is developing policies and procedures in order to comply with Iowa Code for hotlines. Starr is cautiously optimistic that, a year from now, calls will be coming in.

“When there is no system of care, and it falls entirely on the parent to create a system they are not equipped to create, they feel like they have failed,” she says. “As a society, we have set them up to fail.”

Antoinette McCalebb, for one, is looking forward to the new program, if it comes to pass, not just for her family, but for the many others in the community facing mental illness.

To do something on this issue, call your state representative and ask them to provide funding for Polk County children’s mental health mobile crisis response, as well as the statewide children's mental health system.