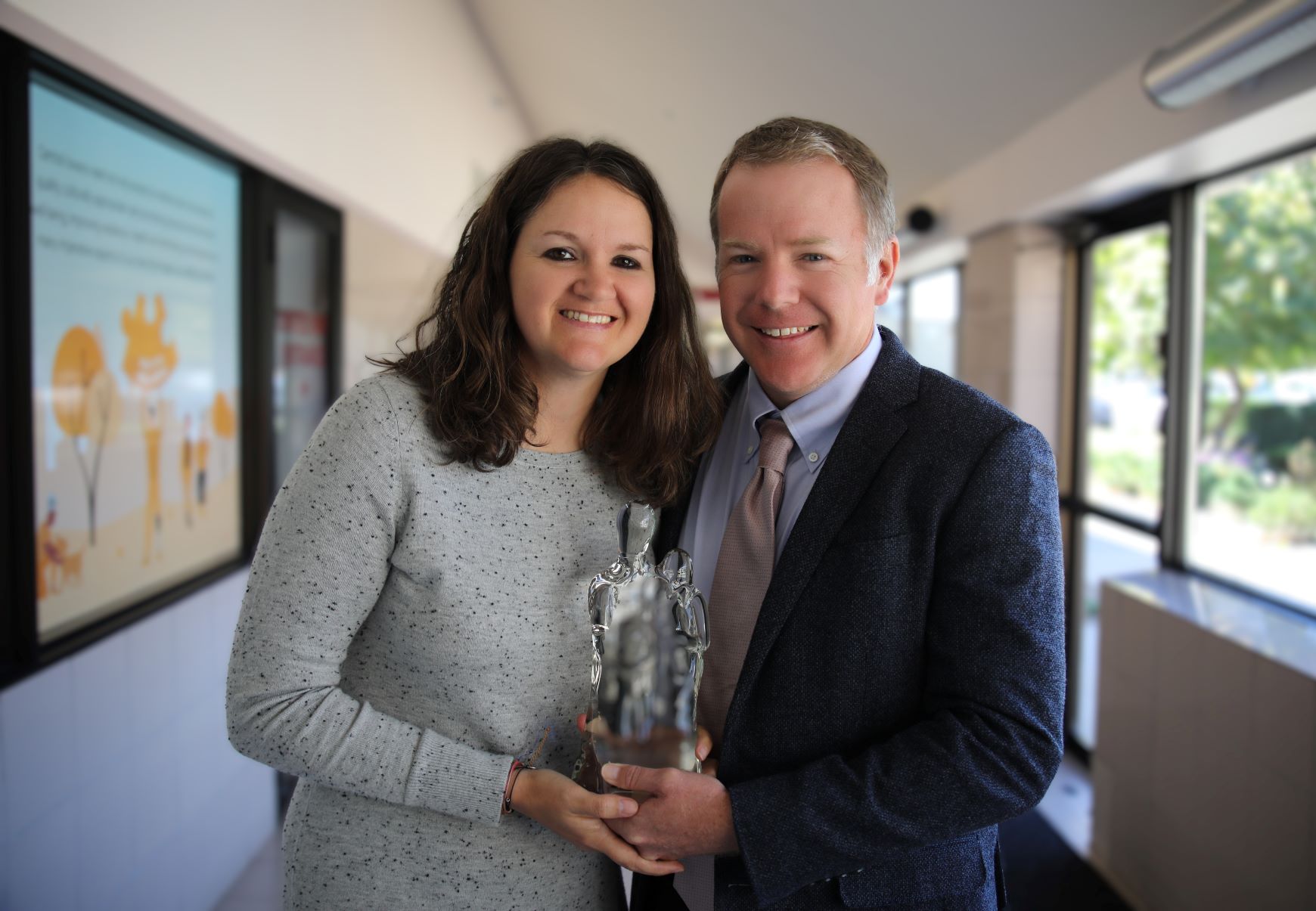 United Way of Central Iowa announced on Thursday, October 6 that Tim and Jess McCulloh were selected as this year’s recipients of the prestigious Tocqueville Society Award.

To be considered for this award, one of United Way’s highest honors, past awardees look to Tocqueville Society members who exemplify inspirational, sustained leadership and service to the central Iowa community.

“For me, being a part of United Way of Central Iowa is about giving back in a way that allows our family contributions to impact our entire community,” said Tim McCulloh, Surety Bond Executive at Holmes Murphy & Associates and Vice Chair of Volunteer Engagement on United Way of Central Iowa’s Executive Committee. “I’m so proud of the work we collectively have been able to accomplish through this organization.”

The McCullohs have contributed to United Way of Central Iowa at the Tocqueville Society membership level since 2013 and have been giving to United Way since 2004. The entire McCulloh family has been actively engaged with the organization, advocating for Early Childhood Success through being active Women United members, as well as volunteering on a variety of committees and cabinets.

“We are privileged to have children and are so fortunate to have caregivers and teachers who we trust alongside us to help them grown and learn,” said Jess McCulloh, Senior Human Resources Consultant at Wells Fargo and Women United Representative on United Way of Central Iowa’s Public Policy Cabinet. “Tim and I know that by lifting up all families and children in our community – especially in early childhood and education – that we are also enhancing the experiences of our own children. Caring for our community is a shared responsibility, and we are committed to doing our part.”

In addition to the positions previously mentioned, Tim currently serves on the board and Chairs the Volunteer Engagement Cabinet, and Jess serves on the Women United Engagement Committee and was the 2021 Chair of Women United. They’ve held numerous leadership positions within the organization, including both being a part of the Tocqueville Campaign Committee from 2014-2016. Jess has served on multiple Women United committees since 2011, recruiting several new committee members over that time. Tim has led multiple United Way annual campaigns at Holmes Murphy and has been an internal champion of LINC, another United Way donor affinity group, to support the growth of young professionals.

“Central Iowa is fortunate to have the McCullohs, not only because of their generosity and care they have for everyone who lives here, but also as role models for the next generation of philanthropists,” said Mary Sellers, President of United Way of Central Iowa. “Their leadership and contributions have had immeasurable impact on our community, and we appreciate their continued dedication to serving central Iowa through United Way in such powerful ways. The results we’ve seen under their guidance are incredible and the scope of the positive change they’ve created is inspiring.”

Outside of work, the McCullohs enjoy spending time in the community with their two children, participating in many community, civic, and professional activities. Tim and Jess are also active members at Hyperion and at their children’s schools.

“Tim and Jess are incredible champions for central Iowans,” said Steve Chapman, Past United Way of Central Iowa Board Chair, Campaign Chair, and Tocqueville Society Award recipient. “I appreciate how United Way honors philanthropists of every age, and through Tocqueville Society, we continue to explore how experienced philanthropists can help the next generation, like Tim and Jess, reach their philanthropic goals. The genuine care the McCulloh family has for fostering a thriving community is evident by their involvement and inspiring generosity. I am honored to be a part of recognizing them with this year’s award and share my congratulations for all they’ve helped make possible for central Iowa.”

About The Author: Melanie Campbell