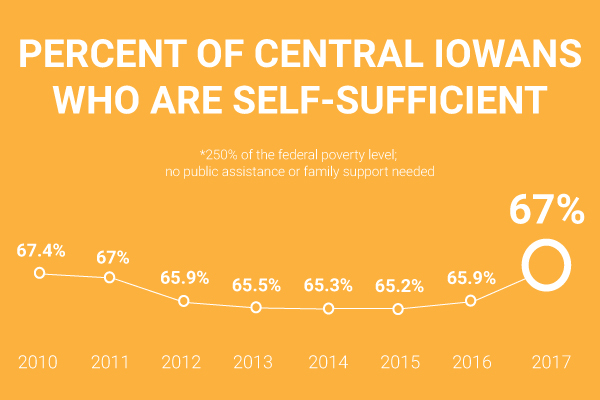 The percentage of central Iowans who were financially self-sufficient increased to 67% in 2017, up 1.1% from the previous year and up 1.8% since 2015, according to the latest U.S. Census data released this December.

“Our efforts as a community are working,” said Elisabeth Buck, president of United Way of Central Iowa. “After a six-year downturn, the number of families who are thriving in Polk, Warren, and Dallas Counties is increasing, and that especially means more children are having their basic needs met and are having greater opportunities for healthy development.”

United Way of Central Iowa uses “The Cost of Living in Iowa” study from the Iowa Policy Project to define self-sufficiency as 250% of the federal poverty level. At this level, families can cover basic expenses, including food, housing, clothing, transportation, child care, and health care. As their income continues to rise, they can begin to save, pay loans, cover education expenses, and afford other items. U.S. Census data focuses on 100% of the federal poverty level (FPL), where most families struggle to afford critical basic needs.

“These are significant improvements, especially for children and African Americans,” said Renée Miller, chief community impact officer at United Way of Central Iowa. “Since our community set a common goal and strategic plan for addressing poverty in 2014, we have started to make progress and will continue to work together to tackle the barriers that keep people in poverty, especially as central Iowans face rising costs in child care, health care, and housing.”

United Way of Central Iowa has invested in addressing the barriers that keep people from achieving financial stability through its OpportUNITY community plan and by helping adults acquire the training and education they need for better jobs. The percentage of students graduating from high school within five years increased more than 10 percentage points to 93.6% in 2017, moving us closer to our community's Goal for 2020 in Education, and the number of people pursuing some college and/or an associate degree increased by 2,793 people from 2015 to 2017.

Among United Way of Central Iowa’s achievements over the past two years: 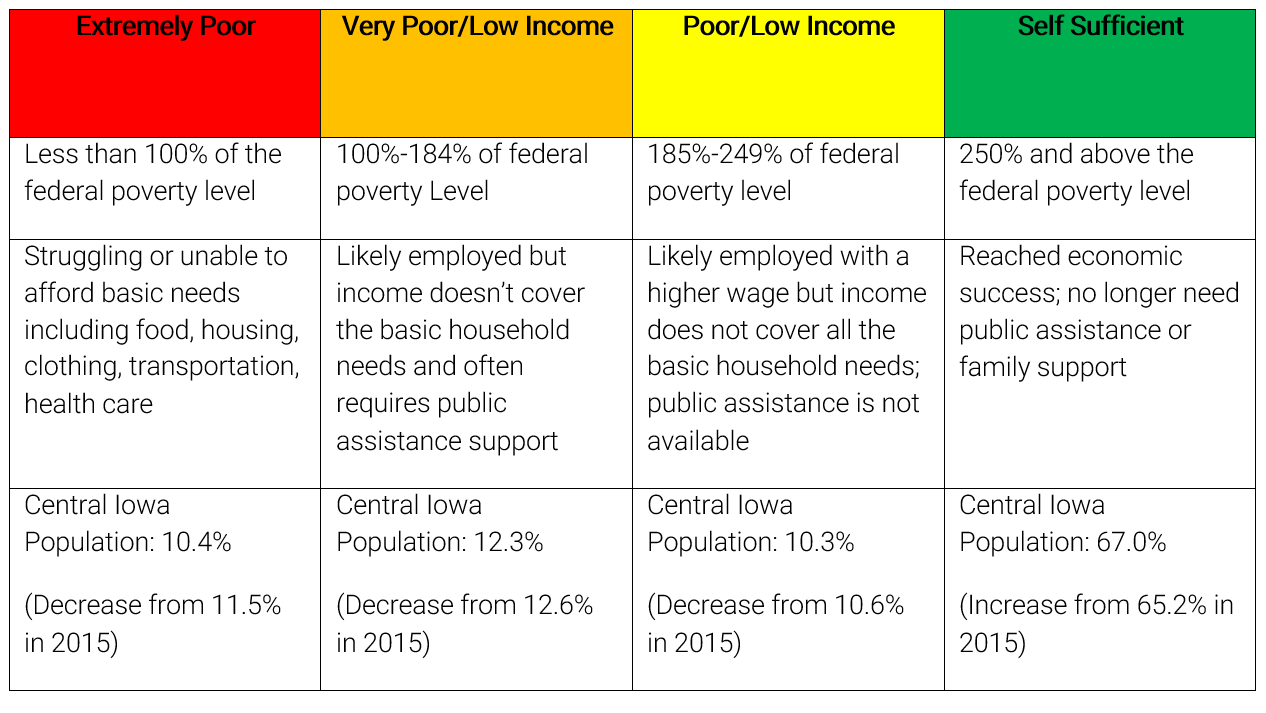 Central Iowa has developed the OpportUNITY plan to address barriers that keep people in poverty. Learn more about the plan and how you can get involved:

Elisabeth Buck is the former President of United Way of Central Iowa. As the organization’s chief executive (and former Chief Community Impact Officer) she led United Way’s strategies to achieve substantive community impact for over a decade until her retirement in 2021.