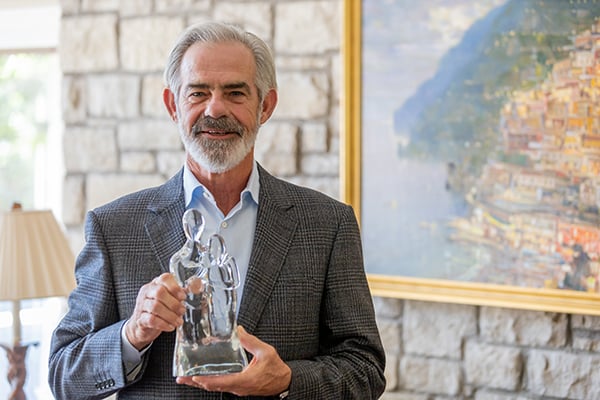 Gerry Neugent, co-chairman of the board and former CEO of Knapp Properties, was selected as this year’s winner of the prestigious Tocqueville Society Award from United Way of Central Iowa. This award is the organization’s highest honor, given annually by past awardees to an individual or household who exemplifies inspirational, sustained leadership and service to the central Iowa community.

“I am humbled and honored to be the 2020 Tocqueville Award recipient,” said Gerry. “United Way of Central Iowa makes a huge impact on meeting the challenges facing our community and its most vulnerable residents. I am proud to be a part of it.”

The award was presented at the annual Tocqueville Society Celebration on September 30, which was held virtually this year, sponsored by Ryan Companies. The celebration recognizes the more than 430 central Iowa Tocqueville Society members and households comprising United Way's premier philanthropic society, who annually invest $10,000 or more in the community through United Way of Central Iowa in the areas of health and human services.

“Gerry is the ultimate connector. When our community is facing a problem or a challenge, if he can bring resources together to improve the lives of central Iowans, he’s all in,” said Tom Mahoney, chairman of the board and former CEO of ITA Group and 2020 United Way Campaign cabinet member. “He is genuinely as nice a man as you’ll meet and has devoted his life to giving people in need a hand up. Gerry is incredibly dedicated to uniting our community and showing us the way. I congratulate him on being recognized as this year’s award winner. He has made central Iowa better and stronger.”

In addition to his duties at Knapp Properties, Gerry enjoys participating in many community, civic and professional activities outside of United Way. He currently serves as a Director of American Equity Investment Life Insurance Company and Iowa State Bank. He is past Chair of the Greater Des Moines Partnership, President of the Des Moines Community Playhouse, the Des Moines Public Library Foundation, the West Des Moines Community Enrichment Foundation and has served on many other city and community boards.

Since its inception in 1984, Tocqueville Society members have contributed more than $94 million to improving the health, education, and financial stability of central Iowans. More than 430 Tocqueville members give $10,000 annually to create measurable and lasting change to central Iowa’s most pressing issues. Join this prestigious group of central Iowa leaders by donating at this impactful level through your workplace campaign, donor advised funds, stock, or www.unitedwaydm.org/givenow. If you would like to discuss giving options, including the Tocqueville Society Step-Up program, it would be my pleasure to speak with you and share more about how your gift will make a difference in our community. Please connect with me at sara.kurovski@unitedwaydm.org.