Des Moines received the prestigious All-America City Award for its civic engagement to help more young children from low-income families achieve grade-level reading proficiency and early school success. This is Des Moines’ sixth award; the city is tied with Roanoke for receiving the most awards of any community nationwide.

The National Civic League and the Campaign for Grade-Level Reading presented the award to United Way of Central Iowa on June 16 at the All-America City Award event in Denver. Des Moines was one of 15 communities nationwide to receive the award. United Way has led the Campaign for Grade-Level Reading work in central Iowa with a focus on engaging the community to ensure all children read proficiently by the end of third grade, the number one predictor of high school graduation.

“The City of Des Moines shares in this honor, as the All-America City Award recognizes the collaboration of so many organizations, educators, parents, and volunteers working together to help our youngest residents learn skills needed for success,” said Scott Sanders, Des Moines City Manager. “The people of Des Moines are what make our City a continuous award winner.”

“United Way of Central Iowa is honored to accept this award on behalf of the many individuals and organizations who have partnered with us to give all children tools and resources they need to read proficiently by the end of third grade,” said Elisabeth Buck, president of United Way. “This award reflects the progress we have made together in preparing more young children for kindergarten, reducing chronic absenteeism, and promoting summer learning so that children retain the skills they learned in school. It also shows that we are making meaningful progress toward our goal of having 95 percent of students graduate by 2020.” 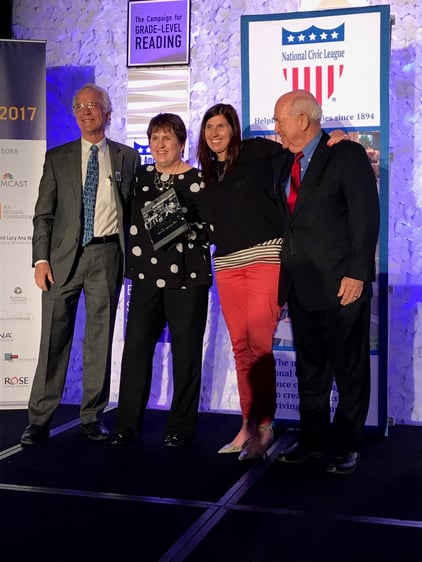 To select the 15 awardees, a panel of judges examined the self-assessments from 27 communities nominated as finalists. Community Self-Assessments are a rigorous process designed to help communities reflect on what is working and prepare for the next phase of learning and action.

The 2017 All-America City Award winners are communities that:

Des Moines is also noted for exemplary efforts in promoting civic engagement and inclusiveness. In May 2016, United Way of Central Iowa formally launched Read to Succeed, its first-ever community-wide call to action, to engage the whole community in helping students read proficiently by the end of third grade. The launch event resulted in more than 300 volunteers signing up to read with children through the Power Read and Book Buddy programs. United Way and its partners have also strengthened collaboration across institutional sectors – including business, nonprofit, government, education, and community groups – in support of improving reading proficiency.

Reading proficiency by the end of third grade is a critical milestone toward high school graduation and career success because it marks the transition from “learning to read” to “reading to learn.” In central Iowa, 22.7 percent of students are not reading proficiently by the end of third grade, according to the Iowa Department of Education. Students who have not mastered reading by that time are more likely to drop out of high school and struggle throughout their lives. Since United Way of Central Iowa announced the community Goal for 2020 in Education, central Iowa has had a nearly 10 percent increase in graduation rates to 92.8 percent in central Iowa in 2015.

About the City of Des Moines

About United Way of Central Iowa

About the Campaign for Grade-Level Reading

Launched in 2010, the Campaign for Grade-Level Reading is a collaborative effort of funders, nonprofit partners, business leaders, public officials, government agencies, states and communities across the nation to ensure that many more children from low-income families succeed in school and graduate prepared for college, a career and active citizenship. Since its launch, the GLR Campaign has grown to include more than 300 communities, representing 42 states, the District of Columbia, Puerto Rico and the U.S. Virgin Islands, with more than 3,800 local organizations and 250 state and local funders (including 168 United Ways). To learn more, visit gradelevelreading.net and follow the movement on Twitter @readingby3rd.

About the National Civic League

For more than 120 years, the National Civic League has worked to advance good governance and civic engagement to create inclusive, thriving communities. We achieve this by inspiring, supporting and recognizing equitable approaches to community decision-making. Through its signature effort, the All-America City Award and its work on racial healing, sustainability, health equity and fiscal sustainability, NCL supports cities to create a better, more equitable and inclusive future.