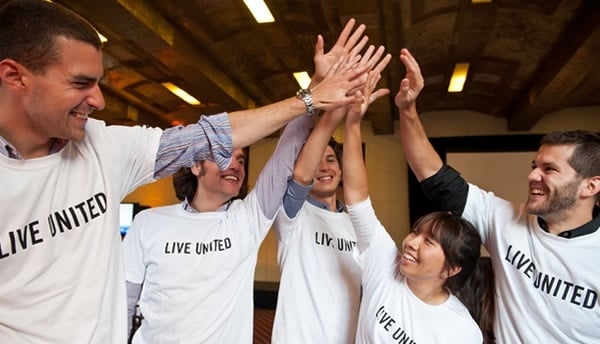 As United Way of Central Iowa wraps up its 2016 campaign, we want to honor four companies that achieved Chair’s Group status this year.

These companies, along with 18 additional Chair’s Group companies, lead the way for our campaign, with each organization raising $200,000 or more. Their support is a significant reason why United Way of Central Iowa is the number one per capita giving United Way in the country among United Ways raising more than $25 million. Not only do these companies raise significant funds for United Way, their employees also are heavily involved in volunteer and advocacy efforts throughout the year.

We congratulate the following companies who are new to Chair's Group this year. We also thank all of the individuals and companies who give to United Way's campaign to make our work in the community possible!

A nearly 18 percent campaign increase propelled FHLB Des Moines into the Chair’s Group. A fresh streamlined campaign that included new special events created renewed excitement and energy for their United Way campaign. All employees who participated in the campaign were also rewarded with an extra day of paid time off for helping the bank achieve Chair’s Group status.

LCS has experienced tremendous growth in both employee giving (up 28 percent) and special events (up 38 percent) over the past two years. The LCS campaign committee planned and executed a series of events during the one-week campaign to engage employees and create excitement for United Way.

Employee giving that increased more than 18 percent and a dollar-for-dollar match in honor of United Way's 100th Anniversary propelled Sammons Financial Group into the Chair’s Group this year. The campaign committee focused on helping employees better understand that UWCI is a valued community partner that has the capacity to collaborate with corporate and non-profit organizations in addressing significant community needs.

Mercy Medical Center returned to Chair’s Group this year thanks to strong support from its leadership team. As one of the largest employers in Greater Des Moines, Mercy hopes to continue to grow its support of United Way.

The funds raised during the 2017 United Way of Central Iowa campaign are a means to an end. They allow United Way to lead the fight for the health, education and financial stability of every central Iowan. Thanks to the support of our Chair’s Group companies, as well as the nearly 500 other companies that run campaigns, United Way is making progress toward its goals for 2020 in Education, Income and Health.

Learn more about the difference your dollars make in United Ways' work:

Thank you to the 22 Chair's Group companies who raised more than $200,000 in their United Way workplace campaigns!