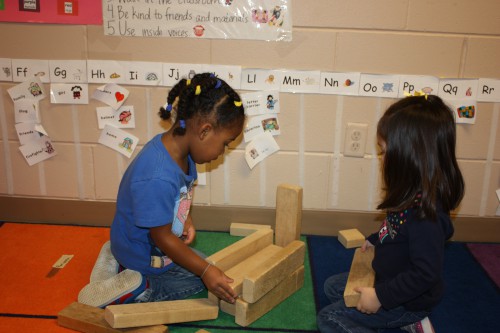 In an effort to keep the students, the staff, and their families safe, Capitol Park Early Learning Center suffered big losses. And more could be on the way.

Capitol Park Early Learning Center has been a part of the Des Moines, Iowa, community since 1968 and a United Way of Central Iowa Women United partner for more than two decades. For the first time in its history, it had to close its doors for a period of seven weeks and three days due to the COVID-19 pandemic.

During that period of time, the childcare facility supporting families who are economically unable to afford childcare at full market rates – including families who rely entirely on public funding for their children – had a financial loss of more than $70,000 in parent revenue. After reopening on May 28, nearly 17 families, or 30 children, did not return; a loss that the start of school this year isn’t proving to help them re-gain as it may have in the past.

“With COVID numbers going up, many parents who were expecting to have their kids back this fall have now decided to begin homeschooling,” said Whitney Fink, executive director of Capitol Park Early Learning Center: “There are also a mix of parents who are now working from home, finding other care, or are still unemployed. In addition, parents who were receiving the extra $600 in government-funded unemployment and due for a Child Care Assistance renewal during this time were now being denied because the additional dollars put them over the income limits – they couldn't pay any longer so they had to pull their children.”

As a measure of safety for the staff, children, and their families, the Board of Directors for Capitol Park called for the temporary closure due to the number of family relatives, not necessarily the parents or children themselves, who received positive test results. Other than Whitney, who stayed on salary, employees were able to collect unemployment, as well as the additional $600 if they applied for unemployment. The families also felt the incredible loss.

“As an employee of Iowa Workforce Development, and considered an essential worker, I had to find care for my son for 10 hours-a-day at my home while I was working,” said Dara Flanigan, a Capitol Park parent: “The first week seemed impossible in trying to keep the same schedule as they had at daycare while meeting my deadlines and attending meetings. I had no idea where to begin with an education plan. My family helped, and you could say the closure impacted all of them because everyone had to pitch in to help him while I worked.”

Whitney shared that many Capitol Park parents she kept in contact with continued to work during the center’s closure and had to find other childcare, if it was even available to them as many centers were not enrolling new children during that time. Some parents, like Hazel Grace, were unable to continue working.

“Though I appreciate the Board’s keeping our safety in mind, I’m a self-employed single mother,” Hazel said: “The shift to having my girls with me all the time certainly tested us and my business. I simply could not work. Not being eligible for unemployment during the closure, we simply had to wait and do the best with what I had. Now that Capitol Park is open and childcare is available, I am catching up on my financial responsibilities and keeping a positive attitude.”

Closed or open, the fear of deeper financial loss is looming. The Iowa Department of Human Services (DHS) was initially intending to discontinue funding childcare centers based on enrollment on July 31 of this year. Now DHS has extended that date out to October 4, which Whitney considers a big win for childcare facilities across the state. Once that change is implemented to be based on attendance, Whitney estimates Capitol Park would lose nearly $8,500 month. She worries how the center can manage financially when that starts to add up: “I know with the Child Care Assistance change coming later this year, there are many centers that don’t have the partnerships in place that we do who will be at risk for debilitating loss, and some may not be able to recoup from this.”

That’s the one glimmer of hope for Whitney: Capitol Park Early Learning Center has great partners who are continuing to guide her and the staff through the COVID-19 pandemic. “I stay in close contact with consultants from Iowa Association for the Education of Young Children and Drake University’s Early Head Start-CCP,” she said. “I’m also connecting with my fellow childcare center directors from across the metro who are in this alongside me. With these connections and opportunities for coaching each other on best practices and precautions, I know we will get through this.”

Want to advocate for childcare centers like Capitol Park?

Want to ensure that our youngest central Iowans have access to the education and developmental support they need and their parents have affordable access care so they can continue working? Consider joining Women United to stand with us in the fight for early education and child development in central Iowa.